MAY 25, 2018 – Attorney Bradley J. Ellis has been selected to receive the Order of the Arrow‘s (OA) Distinguished Service Award (DSA). Founded in 1915, the OA is the National Honor Society of the Boy Scouts of America. The DSA was created in 1940 to honor OA members (youth and adults) who have rendered distinguished and outstanding service to the OA on a sectional, regional, or national basis. Since 1940 only 1,019 people, including the 2018 Class of 54 recipients, have received the DSA. The award is presented at National Order of the Arrow Conferences, and Brad will be presented with the award at a formal ceremony to be held at Indiana University this fall, with an estimated 9,000 attendees.

Brad was elected as a youth to membership in the Order of the Arrow, and through it, he has held leadership positions for such large-scale national service projects as: restoring historic portage trails in the Boundary Waters Canoe Area Wilderness in Minnesota; and building hiking and mountain biking trails in the Teton National Forest in Wyoming, the New River Gorge Forest in West Virginia, and the Buffalo National River in Arkansas. In addition, Brad is the deputy lead advisor for the National Order of the Arrow’s “Arrowman Conservation School,” through which he teaches conservation classes at National Order of the Arrow Conferences (such as at Michigan State University in 2015, and the upcoming conference at Indiana University later this year). 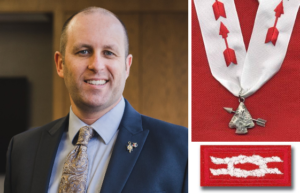 Icard Merrill Attorney Bradley J. Ellis will receive the Order of the Arrow’s Distinguished Service Award. The award is a sterling silver arrowhead, bearing an arrow pointing upward and to the wearer’s right, suspended from a white neck-ribbon upon which are embroidered red arrows. A white on red square knot badge is worn on the uniform to identify recipients.