In the summer of 1953, a young lawyer named Tom Icard was practicing law in a small office in downtown Sarasota next to the Standard Oil station and across the street from the popular Smack’s drive-in. With his practice growing rapidly, he was searching for a partner who shared his high standards of integrity and proficiency.

Bill Merrill Sr. had just completed a stint in the Air Force as a judge advocate and was considering returning to his native Minnesota to practice law. Then he met Tom Icard.

It took but one meeting for the two to realize that they shared a passion for the law and common ideals that they could build upon for many years to come. They joined forces and established Icard & Merrill. Their practice expanded quickly and, before long, they needed room to grow. They built an office at 2045 Main Street, an adventurous decision at the time, and Icard & Merrill became the first law firm in Sarasota to own its office building.

In order to meet the demands of a client base that was growing as fast as the city of Sarasota, the firm asked James W. “Woody” Cullis to join the firm. A former classmate of Mr. Icard at the University of Florida, Mr. Cullis joined the firm in March 1958, having spent the previous five years in a personal injury practice at the well-known Miami law firm of Nichols, Gaither, Green, Frates & Beckman.

That same year, Curtis J. Timm joined the firm. Mr. Timm, a former classmate of Mr. Merrill at the University of Minnesota, moved to Sarasota from Minneapolis, where he worked for a sophisticated corporate law firm. Mr. Timm immediately made his presence felt in Sarasota by wearing a suit and tie, even in the summer. 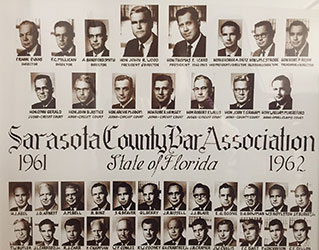 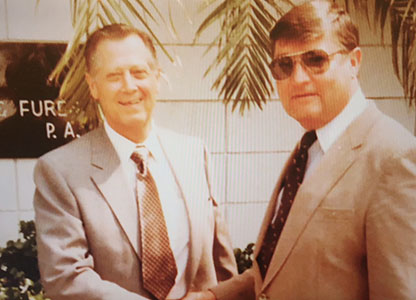 Ten years later, the firm expanded further with the addition of Michael J. Furen, who added a new dimension to the practice with his experience and widely-known reputation in real property law. Another ten years passed, and, after remodeling and expanding its offices, the firm hired three new partners: Michael L. Foreman, Stephen D. Rees, and James E. Aker. The firm’s new partners brought depth to the firm’s practice in estate planning, litigation, land use, and real property. Along with these new partners came an innovative spirit that led the firm to embrace the computer age, becoming the first law firm in Sarasota to utilize computers.

In the mid l980’s, the firm faced challenges on many fronts. All four of its founding partners were gone – Thomas Icard and Woody Cullis had passed away, and Curtis Timm and William Merrill were retiring. Like other law firms, it faced dramatic technological and economic changes in the practice of law. The firm needed to adapt quickly and wisely to the changes it faced, and it met those challenges by electing partners Troy H. Myers, Jr., F. Thomas Hopkins III, and Charles J. Bartlett as shareholders of the firm. The firm also sold its office building to a mid-rise office tower developer and leased office space in an office building at 2033 Main Street, where the firm’s downtown offices remain today.

For the next ten years, the firm sustained significant growth. Highly-regarded family law attorneys Arthur D. Ginsburg and C. Eugene Jones joined the firm as partners to establish a family law practice at Icard Merrill. The firm responded to the expanding real estate market by adding J. Geoffrey Pflugner, Steven R. Greenberg, and Paul D. Beitlich as partners, all of whom focused their practices in real estate law. William W. Merrill III became the first son of a founding partner to join the firm, and, along with David M. Levin, became a partner and gave the firm depth in the areas of land use, administrative, and environmental law. Robert E. Messick also joined the firm and contributed his experience in banking and commercial transactions, while Robert G. Lyons became a partner, providing the firm additional personal injury and insurance claims support. Thomas F. Icard, Jr. became the second son of a founding partner to join the firm when he became a partner, bringing his construction law practice from Tampa. More recent additions to the partner ranks brought their own unique skills and experience; John T. Waskom in the area of probate litigation, Richard S. Webb in the area of real estate and mobile home park law, and Jaime L. Wallace, the firm’s first female partner, who merged her successful family law practice.

Icard Merrill has experienced steady and continued growth over time. The stability and cohesiveness of the firm’s founding members – who practiced law together for more than 25 years – along with the firm’s dedication to increasing its depth and skill in the varied disciplines of law, have served the firm well in maintaining its position of preeminence in the Sarasota legal community. The firm currently employs over 100 people, including attorneys and staff, making it one of the largest law firms in the area and a significant contributor to the Sarasota economy. The firm has also expanded its reach and ability to help those in surrounding Manatee, Charlotte, Lee, Hillsborough, and other counties with offices in Lakewood Ranch and Punta Gorda to accompany the firm’s downtown Sarasota office. 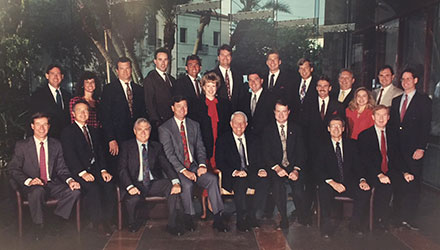 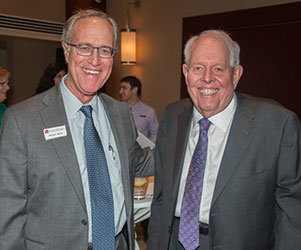 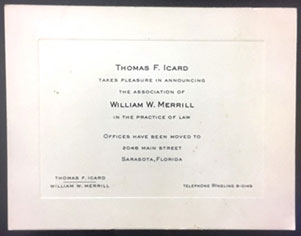 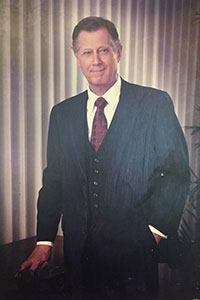 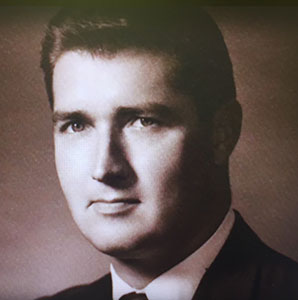 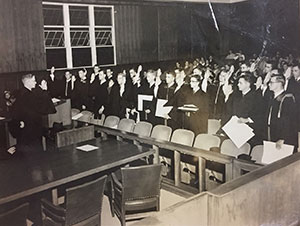 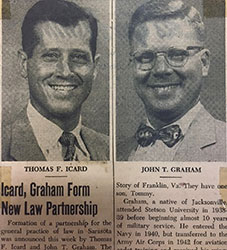