OCTOBER 24, 2022 – Our firm is pleased to announce that N. Macaire King and Meghan E. O’Connell have joined the firm as associates in our Sarasota office.

King’s practice is focused primarily in the areas of land use, land use litigation, and commercial real estate. She has experience representing developers, landowners, and others on issues such as rezoning, special exceptions, comprehensive plan amendments, and a variety of other land-use related matters. O’Connell is a litigation attorney practicing in the areas of personal injury and general civil litigation.

King received her J.D. from Florida State University College of Law. She actively served on three of the university’s four legal journals including serving as the editor-in-chief of the Journal for Land Use and Environmental Law as well as serving on the executive board of the Florida State University Law Review as a notes and comments editor. She won the Steven Gey Note Award for a publication in the Florida State Law Review and also received the Donna R. Christie Service Award. King received her undergraduate degree in history with a minor in political philosophy and economics from the University of North Carolina at Chapel Hill. 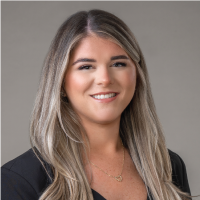