DECEMBER 6, 2021 – Shareholder John J. Waskom has been selected as the recipient of The Florida Bar President’s 2022 Pro Bono Service Award for the 12th Judicial Circuit. This prestigious award is presented to an outstanding attorney from each of the state’s 20 judicial circuits and to an outstanding attorney among the out-of-state Florida Bar members.

“The Board of Governors and the more than 109,000 members of The Florida Bar salute you for your service,” said Bar President Michael Tanner. “The time and professional expertise you have contributed to making legal representation available to those who otherwise would be unable to afford it show our profession at its best. It is my sincere hope that others in the legal field will follow your outstanding example.”

This is the third time an Icard Merrill attorney has been awarded this honor since its inception in 1982 (Art Ginsburg, 2012; Troy Myers, 2011). In addition, the firm received the Chief Justice’s Law Firm Commendation Award in 2010 recognizing extraordinary commitment to provide access to the courts for all Floridians. Upon hearing of his selection, Waskom responded, “I’m of course very honored and surprised to receive this pro bono award. Being of service to the court and of service to those in need is an honor and a pleasure itself.”

Waskom noted that pro bono work began for him in his third year of law school, “At the University of Florida, students in the top 15% of their class were eligible to work at Three Rivers Legal Services. I enjoyed doing pro bono work beginning in law school and found it extremely rewarding.”

He said he was also influenced by Icard Merrill’s pro bono culture, “During the 2008–2009 foreclosure crisis, our firm, through the leadership of Bob Lyons, accepted a great challenge from the Honorable Robert Bennett (Ret.) to organize a firmwide effort to help those in need. My pro bono work should also be credited to these two individuals. They got my pro bono juices going again and I am grateful to them. This combined with being an empty nest parent with time on his hands have also contributed.”

“Our entire firm is immensely proud of John for providing pro bono services to our community and continuing our firm’s rich tradition of giving back and fulfilling community needs. He sets a high standard for our local bar and to all the attorneys in the firm,” said Lyons.

Waskom reflected on how pro bono work affects his practice, “Often the pro bono work I do is with incapacitated people who don’t have a genuine understanding of the proceedings in which they are involved. In other cases, I help guardians who wish to protect or serve a family member but don’t have the resources to employ the required attorney. In other situations, minor children and their best interests and rights are my assignment. In every one of these cases, it’s an honor to be of service both to the court and to these clients.”

Each year, the Florida Supreme Court and The Florida Bar honor and recognize lawyers, groups and members of the judiciary who have freely given their time and expertise in ensuring access to justice for those who otherwise could not afford it. Waskom and all award recipients will be honored at the 2022 Pro Bono Service Awards Ceremony at the Florida Supreme Court in Tallahassee on January 20, 2022.

Waskom received his M.B.A. and B.S. with high honors from the University of Tennessee. He received his J.D. from the University of Florida Levin College of Law. During his second year of law school, he clerked with United Technologies’ in-house legal counsel at their European headquarters in Paris, France. During his final year of law school, he worked as a pro bono attorney at Three Rivers Legal Services in Gainesville under the Florida Supreme Court’s provisional admission program allowing representation of indigent clients in civil matters. Upon graduation, he was named a member of the Florida Chapter of the Order of the Coif in recognition of his ranking in the top 10% of the graduating class.

Waskom has practiced with Icard Merrill for almost 30 years, becoming a shareholder in 1997, and currently serving as vice president. His practice is focused on estate planning, guardianships, probate administration, trust administration, and business transactions. He regularly represents clients in circuit court, state appellate court and in federal court diversity actions. An emphasis of his practice includes contested or litigated matters related to estates, trusts and guardianships, conducting both bench and jury trials.

Icard Merrill has worked for many years with The Florida Bar, Legal Aid of Manasota, the 12th Judicial Circuit’s Guardian Ad Litem (GAL) program, and key community partners on hundreds of pro bono cases in multiple areas of law. Despite a pandemic and virtual challenges, the firm continued to serve clients and engage in the program throughout 2020 with over 550 hours of pro bono work completed by attorneys and staff. 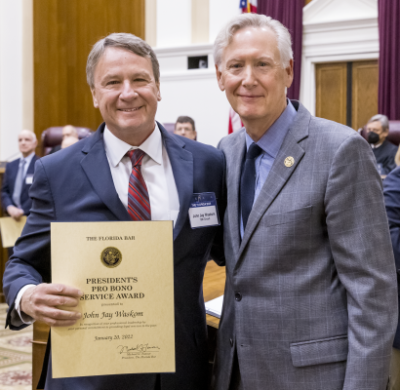